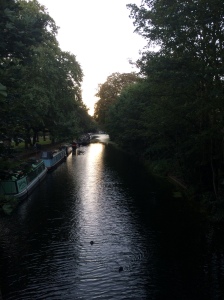 SLS Day 4. Day 4! I have been conferencing for 4 days (as I write this I am waiting for the final plenary to begin) and I feel fine. I have probably overdone the caffeine so far today so if anyone sees me with coffee take it off me. I slept quite well until 4.45am and then I was absolutely, totally and annoyingly awake. Ideas about my paper, yes more ideas but sadly not more coherent ideas, were swirling in my head and I thought I’d get up  and do some work on it. I sat up and and felt decidedly creaky. I stood up and just stood for a while and then turned my head to look out of the window and realised I was essentially doing yoga. I kept going for a bit doing as much stretching as was possible in the space. Then I decided I should run. I didn’t really feel like it but I wanted to have a last little trot out before the Great North Run on Sunday. I didn’t go far but it was nice to be out in the early morning sunshine. By 7am I was showered dressed and tucking into scrambled eggs on toast while scribbling notes based on where my brain had got to with my paper.

Then I packed my bag, checked out and headed to the Legal Education Stream room. My two papers were first. My first paper was a paper on Excellence – it’s a version of the paper I talked about here. It has grown in complexity, breadth and depth and as a result is completely unwieldy. The comments and questions were really helpful but possibly added to the complexity. Tony Bradney however asked whether the question actually

becomes if excellence is an intellectually useful concept to think about and try and ‘find’. I think maybe this is the question around which the paper can be structured

The second paper was really Caroline’s and she did a fabulous job, this was her first conference paper. We reported on a project about critical thinking in law schools. I won’t say too much on this now because we’re still gathering data but basically it seems law teachers agree it’s important, struggle to define it, can talk about the barriers to teaching critical thinking well and run out of ideas when pressed on how we do it better. If you are an undergraduate law teacher and fancy an hour or so chat about critical thinking, get in touch and we’ll set something up.

The final paper in that session was about Law Students, Lawyers, Wellbeing and Vulnerability by Graham Ferris. It addressed many of the issues I struggle with in the wellness debate. It tackled the victim blaming inherent in the resilience discourse (you can’t cope so it is your fault). Drawing on Martha Fineman Graham suggested that thinking about vulnerability as universal yet particular to each person and resilience as the other side of the same coin helps us avoid those conceptual traps the wellness discourse so often falls into. Good paper and a nice reminder that I have a pile of Martha Fineman literature to read. 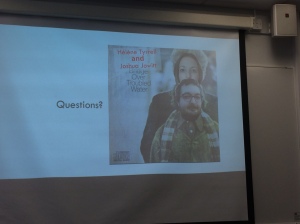 version of the paper which won the Stan Marsh best paper prize at the ALT conference this year. They are using cases in teaching in a way that puts them front and centre and encourages students to see them rather than the textbooks as the key reading. They are having great successes with their approach and it is great to see it being used beyond their summer school and in the Judicial Review section of  their first year public law teaching. Some of my public law re-write for this coming term is based on some of the techniques and the thinking behind them. They also had the best concluding slide ever! Hélène and Josh were followed by Rachel Nir and Tina McKee who shared their research on attendance which tried to grapple with the why students don’t attend question. They have some really interesting data but I think probably need to link it more to the existing literature which might give some context to what they have found. There is lots in the literature about transition to HE which I think would help and this is my reminder to email them. 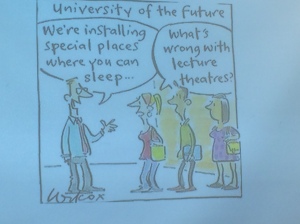 The final paper was, I think, about teaching ethics in New Zealand law schools. I was tired and I stopped listening. Sorry. I was really starting to get to overload and I was tempted to duck out but I was well and truly boxed in in the middle of a row. So I sat it out and then headed for lunch. I had to work quite hard to not freak out, it seemed noisy and busy. I sat in a relatively quiet corner next to Peter Alldridge, current (outgoing) president of the SLS who then asked me to draw the prize for a voucher and books from the completed  publisher bingo cards. Great, potential spot light, just what I needed. Anyway, somehow I felt better after that. Then I went to talk to Emma Tyce at Routledge and she gave my some fliers for mine and Sanna Elfving’s book and we chatted about ideas for future work. It was lovely and it is really nice and reassuring to have a supportive publisher. 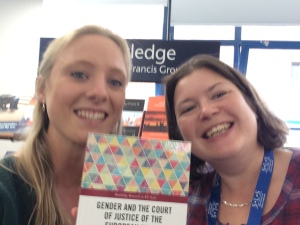 Finally I went to the panel on Brexit. A rather depressing way to end a conference I suppose but there we are. First we heard from Catherine Barnard on the future – it was pretty much doom and gloom but that’s because it is! I have been vaguely thinking about the  Brexit transition period and how it will work but Catherine is right, the transition period is not as much of a problem as what happens after because it seems clear that a trade deal of any description will take longer than the transition period to negotiate. So what happens in between? Catherine notes that legally there is only a very weak base for

transition in the first place and none for extending it. I have seen Barnier’s steps of doom before but having Catherine’s clear explanation of the reasoning behind suggesting the Canadian type relationship is the only viable option.

Daniel Wincott then spoke about devolution which I also very much enjoyed but realised I don’t know enough about and then Sionaidh Douglas-Scott took a look back to show how the Brexit issues are actually issues that have mostly come up before. I enjoyed that paper and once again thought that doing some historical work would be really nice. I always meant to do something joint with my colleague Fran and we often said we’d do it sometime but for her ‘sometime’ didn’t come so maybe I just need to get on with it.

So that’s me done and now on the train home editing and doing the links on a painfully slow wifi connection. It has been a good conference, a really good conference. I was pleased to see so much interest in the Legal Education Stream and on the whole really good quality papers presented in every session I attended. I will leave you with a slide from Fiona Cownie’s presentation on Day 3 and the clear sense that we have moved beyond the sentiment expressed within it: 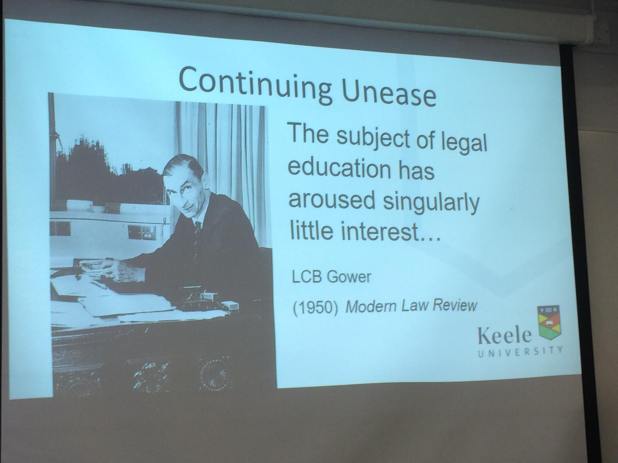