As I outlined briefly yesterday, Day 2 started with me not running and having a slow morning gathering my thoughts and enjoying not plunging straight into my emails and not dealing with the day to day. I walked up to the uni in a gap in the showers and found the room in which my PhD student was presenting. The audience was almost non existent when I got there although a few more people arrived. There were three papers in the session and I struggled to focus on them. The first was probably interesting but was almost entirely read out which meant I lost interest within about a minute. The second was better but not something I knew anything about. The third paper was of course fabulous. It s a different sort of nervousness watching your students or mentees give papers. I really wanted the experience to be a positive one. I’m certainly biased but I thought her presentation was by far the best of the three and I was very proud of her.

Then I went back to Legal Education having missed a couple of papers I had marked – by people I know though so I can catch up with them later. This session was a bit problematic for me. The first paper was interesting and had lots of good stuff in about personalisation of teaching and feedback and also about student expectations etc but I have concerns about the approach, heavily reliant on Myers-Briggs personality type teasing but without being trained in Myers Briggs. It did make me think about how we can talk to students about where they are in their journey, their skills and knowledge to understand more what they need from us. And of course that’s different for each student. The second paper shouldn’t have been there and was just a bit of a car crash.

That made me think too though… what’s the responsibility of conveyors in ensuring the appropriateness of papers? Can they be checked more without filtering out non obvious gems? What’s the role of Chairs in putting both speaker and audience out of their misery? And how do you manage that sensitively because you never know what’s going on for the speakers in the background! Anyway, then we had lunch and then I found a quiet spot to catch up with some other stuff before the plenary session. As I sat there it suddenly felt unbearably noisy, and in spite of hiding away in a corner there were people everywhere… before I really thought about it I packed my stuff up and left. I checked my heart rate (whoa!) and breathing as I walked down towards the hotel. I thought about what to do. I had time to walk a little and then go back to the plenary but in the end I decided I needed time out. 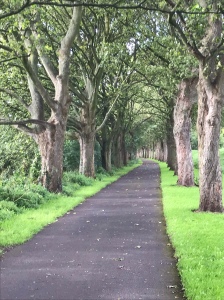 I had a little rest, maybe even dozed off for ten minutes or so. Then I got my running gear on to head out. It wasn’t entirely successful as my legs are so tight. My ankles started niggling almost immediately but I managed a mile, then I stopped and stretched and then did another mile run/walk, stopped to stretch again and then mostly walked another mile with a few jogs thrown in. It helped. I felt well enough to go to Dinner. Dinner was just dinner with a quiz I had no interest in, a pretty good speech and good conversation on my table. By the end I was really tired but otherwise ok.

I slept well. I woke up just before 6 and lazily snuggled back into bed for a little while before deciding to go out and run. As I walked around the room though my Achilles niggled and my calves felt tight so I instead I did some yoga, had breakfast, did some more yoga and then slowly walked up to the uni ready to start the Day 3 with the AGM.